We are now Advanced Meade Dealers

At the beginning of 2007, Evergreen Optics became the sole UK distributors of Konus optical instruments. Konus have been manufacturing optical instruments since the early seventies and now have headquarters in Italy, Spain and the United States. Naturally, whilst there are a host of binoculars and microscopes in their range, it is the telescopes that we are concentrating on here.

We are excited and very fortunate to have taken up the wholesale reins at a time when Konus are upgrading the vast majority of their models and introducing several new ones; the distinctive Konus tube colour (yellow) is being superseded by a superb electric sky blue; five models are now available with electric focus (handset controlled), soft carry case and “sky Explorer” software as standard. A more detailed explanation of these various improvements is given below.

Most astronomers are familiar with the tendency of all but the more advanced telescopes to vibrate as a result of the wind and, more usually, human touch as the observer makes necessary adjustments. This vibration is translated at the eyepiece as a wildly fluctuating image which takes seconds to stop moving. Over a long observing period the cumulative time lost to this phenomenon can be considerable and thus any means of reducing it is desirable. The new Konus electric focus unit makes a significant contribution in this respect as the observer has no need to touch the scope and simply focuses by means of the handset.

Responding to a continued demand for more portability, Konus have introduced soft carry cases for most of their telescopes. As an optical company we have long been aware of a desire on the part of our customers for a practical means of moving their telescopes from A to B. These smart new bags provide the perfect solution and mean that any trip can be made with the telescope if an opportunity for observing presents itself. 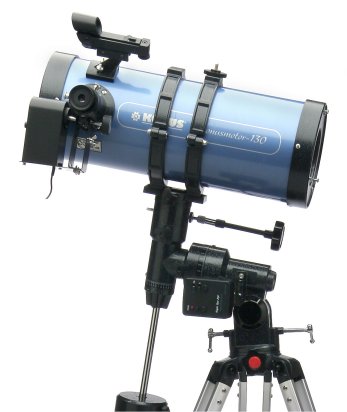 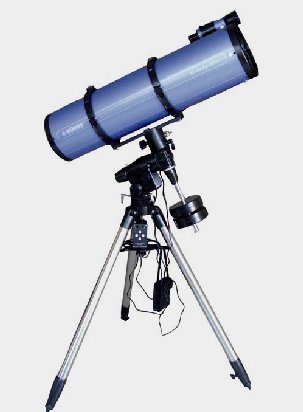 Most Konus telescopes are now supplied with the new “Sky Explorer” CD Rom. Once loaded, this software converts your pc into a virtual planetarium. Simply enter your location along with the time and date and watch the sky for that particular night/morning unfold before you. This is a tremendously useful tool for any astronomer and particularly for the beginner as it constitutes one of the easiest (and most comfortable!) means of familiarising oneself with the relative positions and movement of constellations, galaxies, nebulae and planets. In addition, it will facilitate the efforts of those who wish to learn more about the celestial sphere, and the means devised for mapping the objects in it, by superimposing the ecliptic and lines of right ascension and declination. In any event, whether novice or more experienced observer, this sophisticated software is yet another example of the Konus owner getting significantly more for their astro budget than would be the case from an alternative manufacturer.

Whilst we are excited by the entire revamp of the Konus range, we are particularly enthusiastic about the brand new Konusmotor 130 Newtonian reflector. We fully expect this telescope to dominate the entry level high ground for the foreseeable future. Boasting a substantial five inch, multi-coated mirror this model is a marvellous introductory telescope that provides an array of extras normally associated with more advanced instruments. The price tag of £189.95 means that the motor 130 stands head and shoulders above any other model in its peer group and reflects (no pun intended) the Konus policy for offering unbeatable value. In short, purchasing a Konus telescope ensures the best return for a given astronomical budget in the UK.

In October 2008 Konus will be launching their new telescope at Photokina in Germany, the Digimax-90 is a ‘Go-To’ Telescope and takes full advantage of the Skyscan AZ controller which is the most advanced GO TO tracking system in its class. Fast and highly responsive, the Digimax-90 will locate with accurate precision over 43,000 astronomical objects. The telescope is a classical Maksutov-Cassegrain with 90mm diameter and 1250mm focal length, thus being powerful and versatile enough to deliver a great performance while observing the moon, planets and most brilliant deep sky objects. 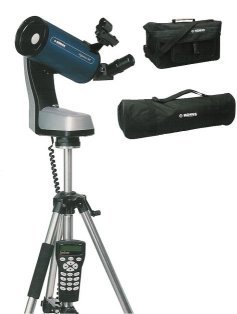