A Refractor uses lenses alone to magnify objects. It is a modern version of the first astronomical scopes used by Galileo. The large objective Lens collects light from a distant object and delivers this light beam to the eyepiece the lens or set of lenses at the back of the tube. The eyepiece then focuses the light on your eye. If the image is properly focused and the optics are properly aligned, you will observe a bright and distinct image of the celestial object.

Refractors are ideal for young astronomers, they are robust and do not require collimation if knocked. They are excellent for viewing Planets and can also be used for terrestial observation. 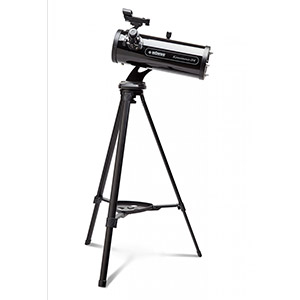 A Newtonian reflector, the earliest type of reflector, uses lenses only in the eyepiece. Most of the work is done by mirrors. Light is collected by a curved primary mirror. A flat secondary mirror, which is much smaller than the primary mirror, directs the collected light to the eyepiece. Early reflectors were large and hard to work with. In 1672, an obscure Frenchman named N. Cassegrain designed a reflector with a curved secondary mirror. Many large and small modern scopes use Cassegrain’s approach to bend the light further. These scopes are more compact than many Newtonians of the same primary mirror diameter.

Many scopes are affected by problems in the optical system called aberrations. Optical designers can correct aberrations by carefully selecting the glass(es) of which the optical lenses are constructed. On some reflectors, this is done by adding another refractive element, called a correcting lens, at the entrance to the scope tube. Such a hybrid scope, which combines elements of a reflector and a refractor, is called a catadioptric. An example of a catadioptric scope that is used by both amateur and professional astronomers is the Schmidt-Cassegrain.

All astronomical scopes invert the image (turn it upside down). So, if you look at a terrestrial scene through your scope, the image will be upside down! Binoculars, a type of refractor that can be used by both eyes at the same time, use a prism or some other optical component to “reinvert” the image so that it looks right side up.

There is now available a revolutionary scope with new technology, it is made by VAONIS and is called STELLINA, it uses amazing technology which enables you to view live images of deep space objects, but not through an eyepiece instead you use a smartphone or tablet. Images produced by stellina are incredible never before have amateur astronomers been able to view live images of Galaxies, Nebulae and Star Clusters through a telescope live.